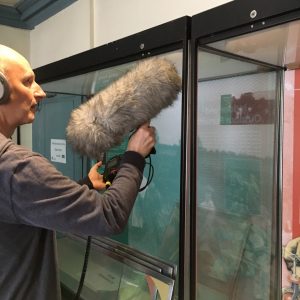 We have been very fortunate in many of our recent productions to have worked with Adrian Newton, a Dorset-based sound artist.  Adrian has not only enriched our productions with his work but helped us to develop our own skills and understanding of sound as a creative medium.

Here’s what Adrian has to say on his website about his involvement in site-specific theatre through his collaboration with WCT.

I have provided sound art contributions to a number of site-specific theatre pieces, developed by Wimborne Community Theatre. This is a remarkable organisation – an entirely community-based theatre that produces often quite challenging performances exploring local places and histories. My contributions have generally addressed ecological themes, focusing on the relationship between local communities and the environments in which they live. This work has involved a series of commissions and provision of collaborative workshops working with the cast to develop the pieces, as well as involvement in performances.

Echoes of the Past, 2019  An event to mark the closing of the Priest’s House Museum in Wimborne for refurbishment.  With Adrian the cast recorded “voices of the house” which formed the introduction to each scene.

BytheWay – sounds in a common wood, 2018  Focusing on Leigh Common, Wimborne; involved construction of two soundscape pieces that were broadcast on radio headphones, as part of a site-specific performance. The idea was to produce an immersive sonic experience, featuring sounds characteristic of the place drawn from both the past and the present. Recordings of woodlands on the site were combined with poems about woods, and spoken performances by cast members, which explore how Leigh Common has been used and valued by people in different ways over time. Sound files available here.

What They Left Behind, 2016  Contribution of soundscape focusing on local histories relating to WW1, performed as part of Wimborne Community Theatre event.

Anthem for Old Road, 2016  A site specific sound installation, focusing on local histories relating to WW1, and incorporating a poetry performance.  A prelude to What They Left Behind.

The Great Rinsing, July 2011  Major multi-media performance, held in a Victorian pumping station on the edge of Wimborne. Contributions included live electronic performance and sound processing of environmental sound, and construction of an installation featuring vocal sounds resonating elements of the performance space.

Source, 2010  A project at Wimborne’s Pump House, an evening of outpourings and distillations, featuring storytelling, movement, music, sound and song, set in part of this Victorian industrial building. The event was programmed as part of the Sting in the Tail Festival (August 29) and Dorset Architectural Heritage Week (September 11). Contributions included live electronic performance and sound processing.

Enquire Within, December 2007  Sound installation in a town house in Wimborne, Dorset, as part of the theatre performance. The piece featured extracts of the book ‘Enquire within upon everything’, a kind of Victorian precursor to the World Wide Web, which was also invented locally (according to local tradition).

The Lie of the Land, July 2006 The piece featured poetry and sounds of electricity, and was performed on a multi-speaker array under an electricity pylon in Pamphill, Dorset, as part of the theatre piece.

Grist to the Mill, 2005  Performances took place in White Mill, an old watermill on the river Stour near Sturminster Marshall, Dorset, now owned by the National Trust. Recordings of a working watermill (Alderholt) were performed live, and diffused over a multi-speaker system within White Mill as part of the performance.