Review of WCT activities in 2018
This report covers activities between October 2017 and September 2018. 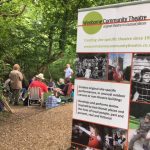 The main focus of the year was mounting the production BytheWay: Sounds in a Common Wood at BytheWay Common and Field, Colehill.  We also took on some new initiatives and developed our skills in several areas.

Building on our previous successful fundraising efforts, we continued to raise funds for this and future projects.

A number of workshops were mounted to explore the techniques we hoped to use in the BytheWay project.

The play was performed on 15th, 16th and 17th June at 5 pm and 7.30 pm.  It proved to be a successful venture as reflected in the audience evaluation feedback.  The audience seemed to love the experience of their sonic journey through the woods and many of the comments written on leaves by the audience were moving and reflective.   It was particularly rewarding that the innovative use of the headsets was praised by the audience and we thus achieved our goal of trying to introduce a new way of working with every production.

After the production the cast assembled on 23rd July to experience the soundscape from the audience’s perspective and enjoyed a walk though the wood followed by a picnic.

We also followed up the production with a Film Premiere on 13th September 2018 at Wimborne Movie Makers mini-cinema.

Thus 2017 – 18 was a successful year with our staging of BytheWay: Sounds in a Common Wood and we also managed to extend our creative skills, particularly in sound and craft. This report also reflects the increased breadth of our activity in other projects and community initiatives.  We would, however, welcome new members as the core group is now relatively small.

We raised close to £1,000 through three events to help finance the group and we are grateful to supporters who come along to events and fundraising activities.

Our thanks are due to several key people who continue to promote and develop the group’s work, in particular Tony and Gill Horitz.   Also, Tuppy Hill, our secretary, and Adrian Williams, our Treasurer, who manage the affairs of the group extremely well and also thanks to Ian Metcalfe for reviewing our accounts.

Finally, there was a great sadness this year with the loss of Dunja Wood.  Dunja performed in the group’s opening production of Voyages in 1991 at Kingston Lacy and was a stalwart supporter of the group, from steering group member to costume designer, photographer to back stage support.  Nothing was ever too much or too difficult for her, and she met every challenge with a positive and cheerful manner.  Dunja’s creativity and calm presence will be very much missed by everyone at WCT but she’ll always be an invaluable part of the company’s development and history.