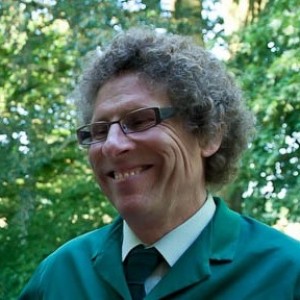 As a writer, his creative ideas have been invaluable in helping to shape scenarios and scripts.  As an actor he has performed in all our productions since By Hook or By Crook in 2004.

Having joined, I learned there was no script to interpret, no stage to perform on, no author’s directions to follow, just a blank page in an exciting location to play with.  It’s not as though we don’t need discipline and effort.  We look, we listen, we wait, we watch, we experiment, we tinker, we collaborate.  We seek stories and characters and artefacts and truths.  We sing and shout and grunt and gurgle and prance and practise and postulate.  We turn up week after week and play and take our turns and gradually feel form and shape taking place.  An exciting moment is when a script is presented and I count my lines with trepidation.  Ten reaches pain and with more lines the agony multiplies – I am so ridiculously poor at learning lines.

As the production approaches, it’s always a race against time and the unspeakable question forms, “How can we really be ready by then?”  We always are, it’s always all right on the night.  I love it all and so generally does the audience, as they are an integral part of the experience.  It is a lot of hard work, most of all for the small team who have backroom roles, often as well as acting, as it is they who make it all possible.  Thanks to the committee people, the script writers, the producers, costume people etc. etc. who make it all absolutely always worthwhile.

I’ve taken part as the feudal Lord of the Manor in The Lie of the Land, a fierce guardian of the Water Museum in The Great Rinsing, and most recently as a gullible customs officer in The Quarterjack’s Challenge. In Grist to the Mill in 2005 I rowed characters up the river to White Mill for a memorable opening scene.”