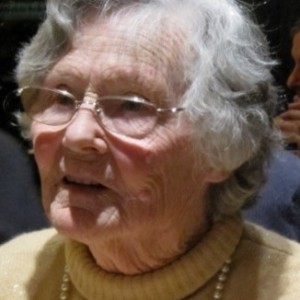 “I’ve been an active member of WCT since I moved here from Devon. I’ve been acting since I was six. The first play I was in was Wind in the Willows. I was a baby rabbit bouncing around the stage and insisted on eating a carrot to make it more realistic. I played Suck-a-Thumb in Struwwelpeter and I can still remember the lines for my part as the Arrow Maker in Hiawatha and being taken out when I cried in the crowd scene. The only time I really get emotional is at the theatre and cinema.

My father died before I was born and we moved around a lot, including to Bournemouth for a while, before we settled in Wargrave-on-Thames. In a way, I suppose, we were quite grand with a chauffeur-gardener and I had a governess between the ages of four and six so I learned to read early. Then I was sent to Wickham Abbey boarding school and we didn’t do very much drama, except house plays. One I really enjoyed was Jane Eyre in which I played Rochester. We also had elocution and singing lessons but I have no ear for singing. Rose Bruford was our teacher for a while before she left to set up her own school. She prepared me for a competition when I was about sixteen. I did a piece from As You Like It and a Bible reading. The judge said it was the best Bible reading he’d heard and I was disappointed to only reach the semi-final but my Rosalind speech wasn’t to his liking. I joined the WAAFs in World War Two after I left school and was in a production of Hayfever which toured around the other stations to entertain the troops. I once played Lady Mary Crichton in The Admirable Crichton at the Fortune Theatre, the smallest theatre in London, I believe. I was also very active in a drama group at the Stanhope Institute and actually met my husband at one of the plays. He was in the audience of The Insect Play in which I played a butterfly, probably not a very graceful one!

I would have liked to act professionally and did make some enquiries at RADA once but I worked as a secretary for a documentary film production company and then ran a secretarial agency for a friend until I married and settled in Surrey. After my two sons were born, I continued to do amateur drama as much as I could, including Hayfever again. Tony remembers me constantly with a book propped up on the sink while I was washing up and learning my lines. I kept it up in Devon too and even tried my hand at directing a production of Arsenic and Old Lace.

Wimborne Community Theatre took some getting used to because I was used to more conventional theatre. I got involved through my family and I think the first production I was in was By Hook or by Crook at Holt Forest in which I played three parts, a local resident, a Royal Commissioner and a villager in the Monmouth scene – all small parts. I think I’m probably past learning big parts so this suits me now because it means I can still do some acting. I’ve been in The Lie of the Land at Pamphill, Enquire Within at Allendale House and The Great Rinsing which I thought was very ambitious but rather odd. My character going around with a shopping bag full of poisonous water was a very strange idea! Last year I was Lady Margaret Beaufort in The Quarter Jack’s Challenge and enjoyed that very much.

I like the idea of community theatre. It’s very unusual that the plays are mostly written
by the cast and we have to adapt to different places. Sometimes I don’t enjoy the evolving
process and I feel we should know our lines earlier but there are some very good workshops. Improvising doesn’t worry me because I’m used to it and, of course, it means you don’t have to learn the lines. It’s a very good idea to have the community involved, particularly schools, and it’s nice to have new members. For me it’s good to mix with different ages, particularly younger people, and I think we need more of them in the group. Without the group, I would be bored – I enjoy the social life and meeting interesting people.”