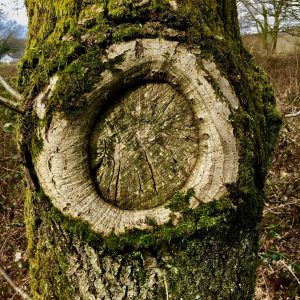 BytheWay: Sounds in a Common Wood took place in a small wood in the form of a performance walk and was the culmination of over a year of research by WCT members which explored the history and culture of the common and woodland, as well as the ecology and myths, fears and well-being associated with woods, and what they mean in our lives today.

Although the area is now designated East Dorset’s first SANG (Suitable Alternative Natural Green Space) and managed by Christchurch and East Dorset Councils, some members of WCT had never visited BytheWay in all the years they had lived in Colehill, while others had known it well for many years and recall tales handed down, as well as their own stories and memories from a time when it was a much wilder place.

At times during the walk, the audience listened through headphones to a soundscape of music and words with occasional glimpses of actors making tableaux in the landscape, relating to, but not simply illustrating, the soundscapes.

There were also several live scenes:
– first, the audience  were ‘interrupted’ as they stood on the bridge into the woods by a mysterious character who would not let them pass into his ‘domain’ until they guessed a riddle he posed. We drew on the traditional British folkloric tradition of The Green Man in creating this character. During the journey, he became part guide, part commentator on the uses and misuses of the Common through the ages.
–  a group of 18thcentury Drovers, resting in the woods overnight before market, shared a traditional fairy story.
–  19thcentury Navvies building the railway line through the woods  and children playing freely in the woods, experiencing the light and darkness of the place.
– finally, in a clearing around a camp-fire, a guitarist played original songs about threats to forests around the world while the audience was invited to write their own stories on leaf-shaped cards, before hanging them on a special tree. Their memories and thoughts of woods, often poignant and beautiful, were recorded for posterity.  See here..

To accompany this piece, I worked with members of the cast to produce two soundscapes, which will be broadcast on radio headphones during the performances. The idea was to produce an immersive sonic experience, featuring sounds characteristic of the place drawn from both the past and the present. One of the pieces features the internal sounds of ash trees, recorded as part of the Heartwood project. These were combined with poems about woods, and spoken performances by cast members, which explore how Leigh Common has been used and valued by people in different ways over time.

Audience numbers were limited to 25 per show, and the production was suitable for anyone over 7 years.

The following items from BytheWay: Sounds in a Common Wood are currently being stored in our materials archive.  Click here to view.