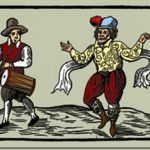 St George and St Patrick fight off many challenges before calling on the Irish Doctor to restore their enemies to life. Father and Mother Christmas also make an appearance to wish the people of Wimborne a Merry Christmas.

Wimborne Community Theatre used an existing script from a traditional Dorset Mummers’ Play for this one-off performance and the cast was made up of local people of all ages. The performance took place after the Christmas Carol Concert in the Cornmarket without advance publicity as a spontaneous and traditional start to Christmas.

The tradition of mummers’ plays in Dorset

Popular in the late 18th century, many English villages had their Yuletide mummers.  Mummers’ plays usually take the form of a combat between the hero and villain, in which the hero is killed and brought to life, often by a quack doctor. The traditional dress of the warriors was usually a soldier’s uniform, decked with ribbons, streamers and sashes. The head-dress was in the form of a helmet with ribbons falling to mask the face completely from view; often faces were blacked to conceal identities. In Thomas Hardy’s novel, “The Return of the Native“, Eustacia Vye was able to take her first look at Clym Yeobright by taking the part of the Turkish Knight without being detected .

Performances were by men, often plough boys or farm workers and most popularly celebrated the legend of St. George, though there are regional variations. The plays were short  and passed on by word of mouth. They were devised so that they could be performed quickly at a landowner or wealthy person’s house, with the main aim being to solicit money, drink or food in return for entertainment. The plays continued in many villages by oral tradition and so over the years variations in the wording occurred.

Mummers’ plays were performed all over Dorset and the script adapted by WCT is based on the original cast of characters in the Symondsbury play which was very similar to the version performed at Sixpenny Handley.

The following items from The Christmas Mummer’s Play have been stored in our materials archive:

Read the script of The Christmas Mummers’ Play, adapted from the Symondsbury version , as a PDF

The production in performance: