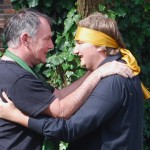 Twelve members of Wimborne Community Theatre took part in a public reading of ‘The Grandchildren of Hiroshima’ by Misaki Setyoyama on the Minster Green, Wimborne, on August 6.  This is what happened:

First, twelve of us gathered in the nearby White Hart garden for a planning pre-read.  As we left to make our way to the Minster Green, a gardener having a pint, said, “I’m not into culture, but that was very interesting.’

In the shadow of the War Memorial, commemorating the lives of local men who died in both World Wars, we laid several kimonos in the shape of the rivers and positioned ourselves in a semi-circle.  We wore black with brightly coloured scarves.

Over twenty people gathered on the grass and the memorial steps to listen, accompanied at times by live flute and recorded rivers – as well as the real sounds of aeroplanes, car horns, and rubbish trucks.  When we spoke the storytellers’ memories, we held up their portraits.

A Japanese woman and her daughter  travelled many miles to hear the reading and were moved by the retelling of the story they know so well. Somebody brought a basket of origami cranes to distribute to the listeners, and as we handed them around at the end of the reading, a dove was spotted flying over our heads to join its partner on a nearby roof. 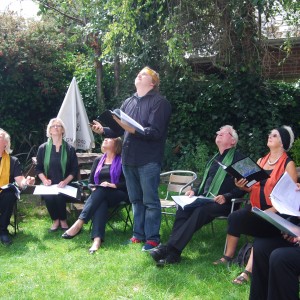 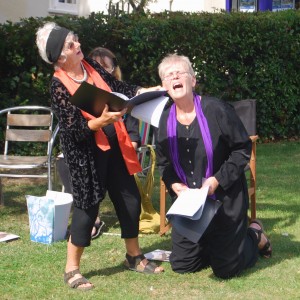 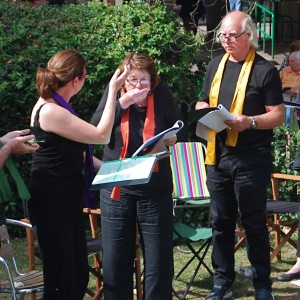 Tracie Billington-Beardsley wrote: I felt it was very powerful to read such moving stories while the world around us kept on moving.  A dust cart was uploading rubbish.   A child was singing and playing on the green near our performance place. People were walking by chatting.  Normality and all I kept thinking was this is how it must have been just before the bomb was dropped in Hiroshima and how would my town be if that happened now. The vulnerability of lives came across by performing it in such a familiar and open space.

View more photos of the reading by WCT on the Minster Green.

View press cuttings from the Stour and Avon Magazine. 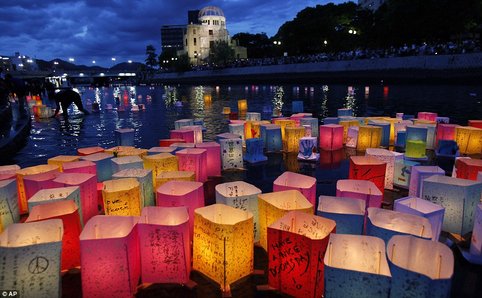 Hiroshima Dispersed is part of an oral history and performance project, The Grandchildren of Hiroshima, developed by London Bubble Theatre in a creative partnership with the Hiroshima Peace Museum and theatres in Japan, and performed by an inter-generational cast in Hiroshima and Tokyo during August.

WCT were invited by London Bubble to participate in Hiroshima Dispersed, by joining groups from London, Palestine, the Philippines, India, Belgium, USA  and South Africa for a simultaneous reading of the play on August 6th, the 60th anniversary of the dropping of the atomic bomb. Read more here.

You can also read about the development of the project on London Bubble’s Project Page.