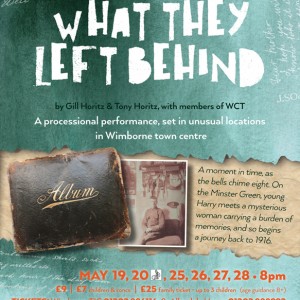 As the bells of Wimborne Minster chime eight, young Harry meets a mysterious woman by the town war memorial on the Minster Green. So begins a journey back to 1916 and a glimpse into the life of the town and its people during the Great War.

The production was set in unusual locations around Wimborne town centre, and explored the lives of local people during World War One. Almost four hundred people attended six performances.

The show explored the legacy of objects and memories and their effect on people in Wimborne during the First World War, and how they connect with our lives today.

‘When we concentrate on an object whatever its situation, the very act of attention leads to our involuntarily sinking into the history of that object such that we become ‘not of the now.’ (‘Transparent Things’ by Vladimar Nabokov

In 2014, we held two events, in partnership with the Priest’s House Museum, to which people brought special objects and shared family stories related to WW1.  From those meetings and subsequent research, we realised people are still affected by the legacy of the Great War, and that memories and special objects are the repositories for their pain as well as their pride.

One woman brought a poem expressing the anger she felt all her life towards her father for the turmoil brought to her childhood but which has now been tempered by her recent understanding about the effect of Post-Traumatic Stress Disorder on the lives of survivors.

Someone else brought an Autograph Album, found on eBay, belonging to Wimborne piano teacher, Gertrude Coggin, who worked as a volunteer at the Beaucroft Red Cross Hospital, Colehill, opened in 1916; in it we read, in their own handwriting, the names and sentiments of men from all over the Empire, in recovery from the Great War.

The writings of the Reverend James Fletcher in the Wimborne Minster Parish Magazine are a great source of information, not only about the fate of loca families but also give voice to the patriotic views of the time.

A quite different artefact was Joan Cocozza’s book, A People’s History, about the diary her guardian, Olive Harcourt, kept during her time as a volunteer orderly at Beaucroft and some entries have been set to music.

One of the most evocative objects was the letter Bessie Angell wrote to the War Office requesting the return of her son’s effects so ‘we shall forget the quicker’; one of her descendants told us that part of the family’s healing was to build a bonfire on which his things were burnt.

And by the strange synchronicity made possible by community theatre, the granddaughter of the soldier in the photograph on the play flier, plays Bessie Angell, and on her costume she’ll wear her own Grandmother’s token sent from the Front.

We didn’t set out to produce a historical play about WW1; instead we chose to focus on the things themselves so we might ‘sink into their history’.  We wanted to awaken the power held within those things left behind – words and objects -, and to find how they still matter in our lives.  They helped us think about the past, and we have responded to them through play and exploration.

‘Ideas come to us as the successors to griefs,at the moment when they change into ideas, lose some part of their power to injuure our hearts.’ Marcel Proust.

Locations
After the first scene on the Minster Green, the audience was divided into three groups and moved simultaneously to scenes set in four different locations: the Cornmarket, the Coles’ shop (in Priest’s House Museum), the museum garden, Church House and finally, they returned to the Minster Green.  Afterwards, audience members were encouraged to linger around the fire bowl to talk about issues raised in the production.

Over 70 people were involved in the production.

I was so impressed with the whole event; the cast, the story line, and not least the actual logistics involved in the production of what was a very moving, funny and thought provoking play. Many a large town or city would be extremely proud to claim this as their own, Wimborne has done it again, thank you all so much!
Councillor Sue Cook, Mayor of Wimborne

The whole performance was exceptionally powerful and very moving.  It had huge atmosphere and was incredibly poignant.

Took my emotions up, down and side to side.  I’m not normally a great fan of ‘serious’ theatre but this has certainly changed my views.  Enjoyed it from start to finish.

Fantastic music, some original, some familiar.  Contact with the era, the First World War, was brought vividly alive and made relevant to Wimborne.

The following items from What They Left Behind have been stored in our materials archive. Click here to view.

The following items gathered as the production was developed have been stored in our research archive on World War One. Click here to view.

This project was supported by Arts Council England’s Grants for the Arts.  Thanks also to Wimborne BID.