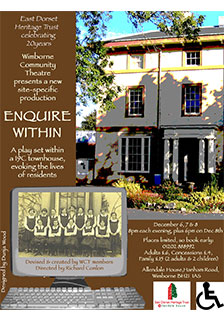 ‘Of what is a house made, really made?’ asks the voice of the House.

‘Enquire Within’ explores this question, bringing to life hints and whispers of lives once lived there. The play’s title and theme of learning and discovery were inspired by two very different but linked events:

1. At the end of the nineteenth century, a series of domestic encyclopaedias: ‘Enquire Within Upon Everything’, were published as a ‘Comprehensive Guide to the Necessities of Domestic Life in Victorian Britain’.

2. In the 1980s, former Wimborne resident and patron of East Dorset Heritage Trust (now based in Allendale House), Tim Berners-Lee began designing ‘Enquire’, a ‘hypermedia initiative for global information sharing’  which could be used on the Internet. Although it was never published ‘Enquire’ formed the basis of the later development of the World Wide Web.

In its current role, the building draws together the themes of learning, technology and heritage, as an invaluable resource for local people.

Enquire Within was first performed in 2001 to celebrate the theatre group’s 10th anniversary and to commemorate the opening of Allendale House as a Community Learning Centre.  It was performed again in June 2002 by invitation as part of the Golden Jubilee celebrations and the Wimborne Folk Festival,  (It was then re-produced with further adaptations, to celebrate 20 years work of the East Dorset Heritage Trust, in 2007 – see Enquire Within (2).)

The audience were led on a journey through the rooms of the house as they went back through time, and met William Castleman and his sons, and other characters who lived in or visited Allendale House, and contributed to the changing nature of Wimborne Minster over the past two centuries.

From 1899 to 1932, Allendale House was a girls’ school. Seventy years later, it returned to educational use, as it became a learning centre and went ‘on line’.

The play was researched and devised by the theatre group and Tim Claque, an AV consultant, was employed for the 2001 production to develop the group’s use of audio-visual techniques.

Richard Conlon, Artistic Director of the 2007 production, said, ‘As a community theatre company which is not interested in theatres, WCT is special. As a venue, Allendale House too is exceptional. To recreate snatches, whispers & echoes of real lives in the very spaces in which they were lived is a rare gift for a director, actor or audience. Of course we, as a company, have taken imaginative leaps. We hope, however, that if we are falling short of the truth, then at least we are making a noble attempt to portray a truth. Allendale House has been a catalyst for development, progress and change since it was built. Those who lived and worked within its walls have always enquired – we hope we are continuing this tradition.’

The following items from Enquire Within (1) have been stored in our materials archive. Click here to view.