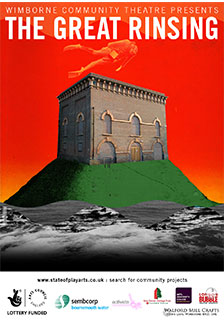 The production told a story set in a future when water has become a luxury. Two children search the chasms and passageways of a derelict museum of water to quench their thirst, and the audience goes with them to hear stories and memories contained within water.

We searched for several years for an unused and unusual building in Wimborne.  We discovered a Victorian Pump House at the end of a lane and were given permission by the owners, Sembcorp Bournemouth Water to create a new production there.  The building became the inspiration for ‘The Great Rinsing’.

Working with London Bubble’s artistic director, Jonathan Petherbridge, and designer, Pip Nash, we created and developed ideas for the show over many months, responding to the building’s industrial architecture and previous research into watery stories and memories about living near the rivers Stour and Allen. The script was written by Jonathan Petherbridge.

The production combined live performance with film and sound and involved over 70 people, artists, students, singers and musicians, from 13 months to 87 years. It was funded by Arts Council of England Grants for the Arts.

A Short Trailer by Martin Coyne

Roger Harrington, Sembcorp’s Managing Director said, ‘Our pump house in Wimborne is a grand old Victorian building which has been part of the local water supply for over 100 years. It is great that the local community may gather in it from time to time to take part in and watch the performing arts, especially if there is a watery theme. We’re pleased to be able to help facilitate this.’

John Somers, Lecturer in Drama, Exeter University said, ‘It was well worth the journey and it was good to see someone else’s approach to Community Theatre. The focus on the preciousness of water was genuinely moving and the venue gave a particular resonance to that.’

Anon said, ‘I just wanted to say what an excellent production it was. I loved the inventive and creative use of the building, its machinery & rooms & of the surroundings.  Also the sound & lighting effects. As a huge fan of Eliot, I was immediately hooked as soon as an extract of ‘The Dry Salvages’ was read.’

The following items from The Great Rinsing have been stored in our materials archive. Click here to view.