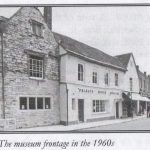 We have been delving into the history of the building which is now the Priest’s House Museum searching for stories, themes and characters as we develop the upcoming production for the Revival project.

Former residents and their stories have attracted us – Christopher and Elizabeth King, 18th century wool and silk mercers, John Lowe, the eccentric stationer, and the Coles family, particularly Hilda the founder of the museum.  Also the many people who have passed through its doors from the streets of Wimborne – the gentry, the customers, the servants and the friends.

Dramatic possibilities have opened up as we explored the building and found hidden doors and architectural features overlapping in time.