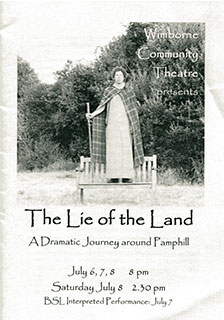 Drawing on the memories of families from the traditional East Dorset village of Pamphill, this site-specific play explored ownership of land (from the Bankes family to the National Trust), and the affect of change on homes and ways of life, as well as reflecting its secrets and enduring charms.

Early in 2006, WCT invited Pamphill residents to a meeting at Pamphill School, and people gave their impressions of life in Pamphill now, compared to thirty or more years ago. They talked about the long history of their families going back hundreds of years, the sense of play and freedom they remember as children and the special atmosphere of the place.  They told us about the mixed feelings some residents have about some aspects of change that has taken place since Ralph Bankes bequeathed his estate of farms and cottages to the National Trust in 1982, and the growing influx of visitors to walk in the Pamphill area.

Talking to Pamphill residents made us consider: who owns land and whose responsibility it is.  How is it managed to the benefit of local people, as well as for the enjoyment of all?  How can the authentic ‘magic’ felt about a place be sustained?  And then in the midst of our research a burnt-out car was dumped outside the school, a raw intervention in the loveliness of the landscape, which gave us a starting point. ‘The Lie of the Land’ is an impression of all these issues.

‘Pamphill is a place of pure magic, that put its arms around you’, said a Pamphill resident. This special quality was often mentioned, and we interpreted this as a sense of past, present and future intermingled in the landscape, enhanced by stories of ghosts and the presence of ley lines running from Knowlton through the area, and marked by an ancient stone situated on the corner of the school building.

‘A great atmosphere for young and old on a summer evening.’

‘Experiencing a familiar place in a different way.’

The following items from The Lie of the Land have been stored in our materials archive.  Click here to view.